When hunting tarpon in Key West’s bays, local knowledge of these skinny waters is critical to cruising through the many miles of backcountry. Some of the navigable waterways run precariously close to tiny keys and steep shoals—near enough, in fact, to touch them with a rod tip. One mistaken turn and you could plow across a sandbar like the bad guy’s boat in a James Bond chase scene. So, it’s best to carefully study a detailed chart (captainsegullcharts.com) or hire a local guide for these parts.

Between a few of the widely-separated keys are large bays or basins—some of which are 2 or more miles wide and generally located about 6 miles northeast of Key West—which empty into the Gulf of Mexico through channels. On each dropping tide the waters drain from the shallows through the channels, an occurrence that effectively concentrates forage in the passages.

At depths ranging from 2 to 5 feet, the basins are deeper than the surrounding turtle-grass flats, but the channels that run through them vary from about 8 to 20 feet deep. It’s in these tide-swept cuts that large numbers of tarpon gather to feed. Surprisingly, some of the most productive channels are the narrowest ones.

This rich basin-and-channel ecosystem isn’t unique to Key West. “In fact,” said Capt. RT Trosset (spindriftfishing.com), who I fished with in Key West, “there are at least 50 channels from here to Big Pine Key, and every one of them should hold tarpon in season.” 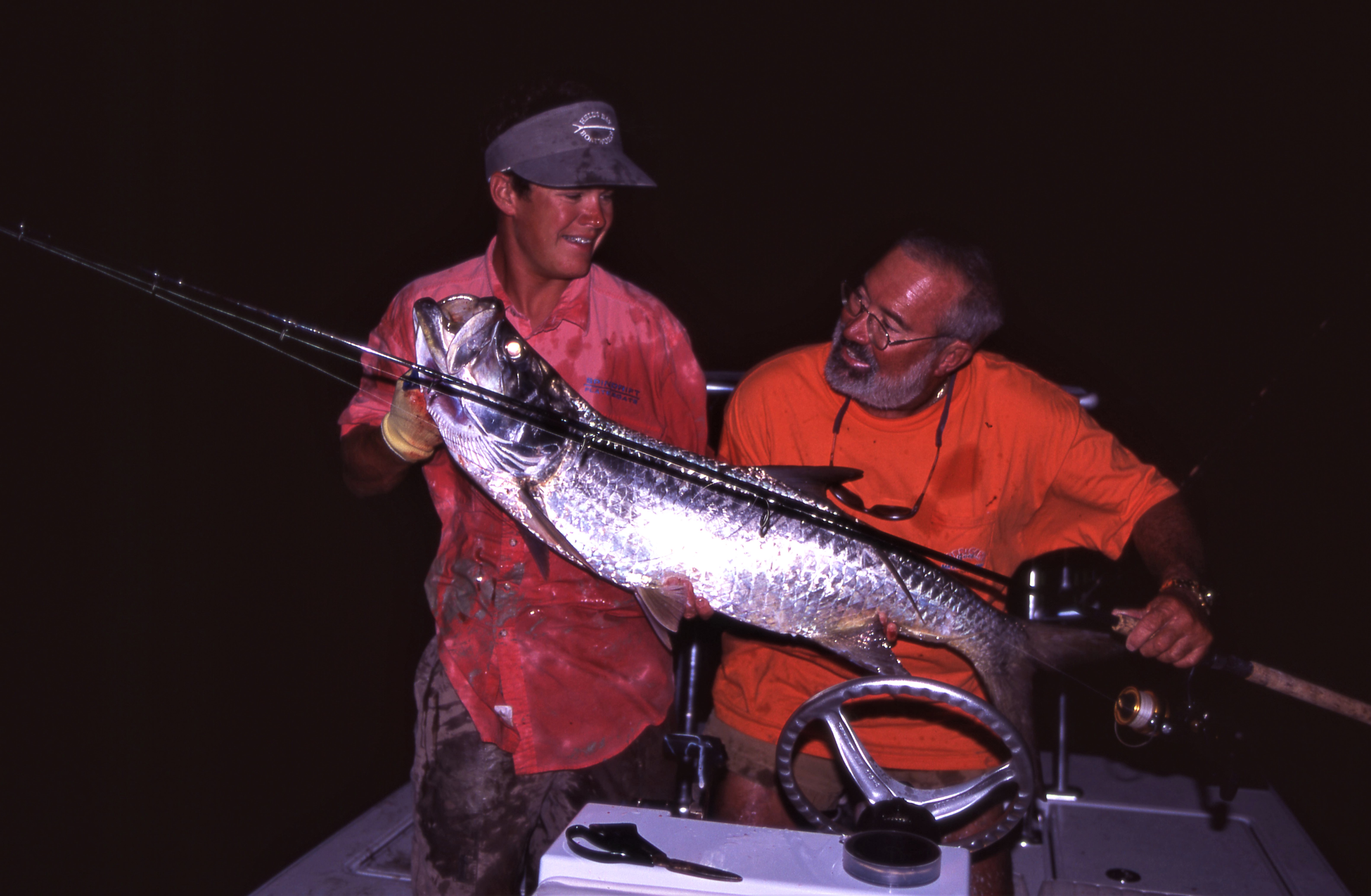 Calm conditions,” said Trosset, “are far better for fishing than when it’s breezy. You can hear the tarpon better. I really like slick nights—I have my best trips when it’s like glass. It also makes it easier for the fish to forage. But when an onshore breeze makes up, they go off the feed, and you’ll have slower fishing.

“Always anchor near the edge of a channel,” he advised. “But you should position your boat so there’s still a good current moving under the hull. That helps the bait or lure action. I also watch for rolling fish, and I try to anchor up-current from them. I like to moor so that there’s a high probability of fish off the stern.”

Scum lines—floating concentrations of seaweed and foam—are an indication of a good place to anchor because they hold tarpon forage such as baitfish, seahorses, shrimp, and crabs. Scum lines often form along the edges of currents where fast water abuts slow water. “Tarpon will roll right in them,” said RT. “I’ve watched big fish feeding on baby seahorses in scum lines right near in the boat.”

It's a good idea to tie a float to the end of your anchor line; that way, if you hook a large tarpon, you can quickly release the rope to follow the fish. After the battle, which may last up to an hour, it’s a simple matter to return to the anchor and retrieve it or continue fishing.

As with many types of angling, randomly casting a lure around the boat is a favored method of tarpon fishing, especially when the current is slow. This is a great application to cast the Game On! Big Occhi. Trosset will toss plugs or soft plastics, and then slowly retrieve them about six inches at a time followed by a twitch of the rod tip. This imparts a crippled baitfish look to the lure and often prompts lazy fish into striking. When a strong current is running, however, a more productive technique is to cast off one corner of the stern, twitch the tip, and gradually feed out line 6 to 8 inches at a time. This drop-back method lets the lure or soft plastic work effectively about 10 inches beneath the surface and travel a long distance from the boat.

“You want to cover a lot of water,” said RT, “and try to get a fish’s attention with the lure. Then you try to help him find it. Swimming the lure by using the current is better than constantly retrieving it because it’s in the water longer, covers more territory, and gives the fish a much better chance to find it.”

Trosset uses a variety of soft plastics and diving plugs. He favors color patterns with black backs and silver sides because black provides the best silhouette for night fishing, and the silver throws a fish-attracting flash.

Captain Trosset attaches about 7 feet of 50-pound-test fluorocarbon leader to his lure. But he may shorten the leader if he’s fishing in a particularly shallow spot. When he’s not getting bites during bright conditions he’ll drop to as light as 40-pound test, but during darkness he can safely move up to 60- to 70-pound leader because fish can’t see as well.

Tarpon feed better in warm water and prefer temperatures of 75 degrees or more. A range of 78-82 is ideal, although the water was about 89 degrees during my summertime visit with Trosset and his son Capt. Chris Trosset a few years ago, and the fish were abundant and active. The action on the Keys flats starts any time after the water warms, which is often as early as late February with a good bite lasting thorough July. May and June, according to Trosset, are two of the most consistent months to catch fish.

We were fishing the evening and night because tarpon are largely nocturnal and start to feed ravenously as the sun sets. Foraging is triggered during low light and darkness because that’s when multitudes of shrimp wiggle from their sand burrows and swim to the surface where they attach to large strands of floating turtle grass. In fact, you can easily spot them at night by using a strong flashlight—their eyes reflecting scarlet red. Tarpon rise and inhale the crustaceans on top, making heart-stopping popping noises that you can hear from quite a distance. But tarpon are opportunistic feeders and will also gladly gobble small crabs, seahorses, and a variety of other baitfish, which is why soft plastics work well. 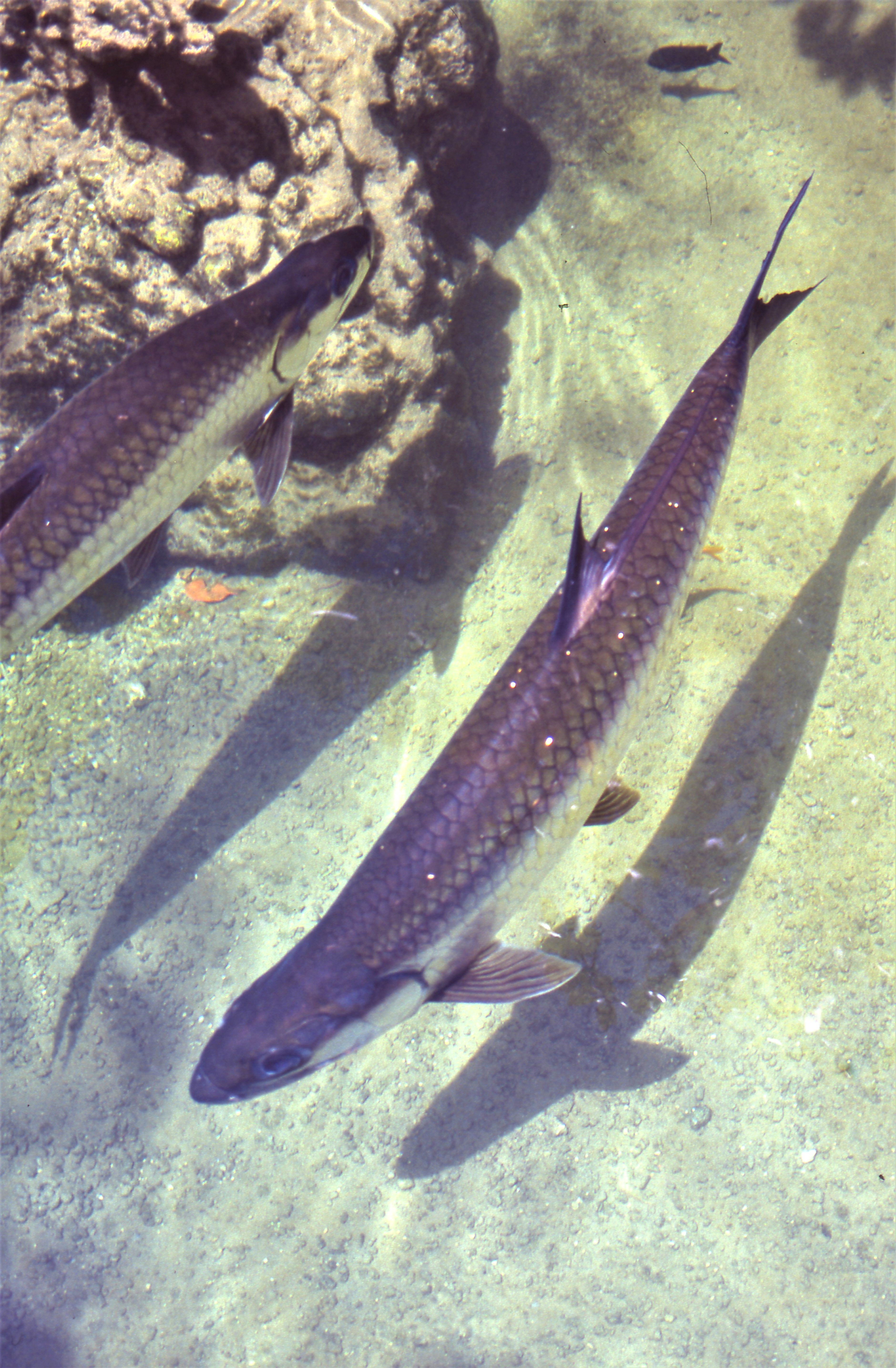 When planning a night trip, the most productive times coincide with certain tidal conditions. Your best bet is to fish when the tide starts moving about an hour before dark. That will give you a full 4 or more hours of strong current, and therefore prime fishing opportunity. Some anglers prefer to go to bed early and get up early, and the morning bite can be just as productive. If you want to fish in the early morning you need to be on the water while it’s still dark and when the tide will still be running for about 2 hours after sunrise.

Captain RT likes a 7-foot, medium-heavy rod, to which at the time he attached a conventional reel like a Penn International 965 or 975 lever-drag. He feels that conventional reels are easier and more efficient for drifting baits back to fish while anchored. For casting lures and plugs, at the time, he and Chris liked a Penn 560 spinning reel.

RT loaded his reels with 20- to 30-pound Spectra line because superbraids have higher sensitivity to feel a pick-up, better hook-setting ability, and can put more pressure on the fish. The disadvantage of superbraids is that they don’t stretch during the numerous jumps that tarpon make and therefore could potentially pull a hook. “But,” concluded RT, “if you’re a good angler the lack of stretch doesn’t matter quite as much because you know how bow to the fish during a jump.”