In mid-October, fishing buddy and saltwater fly expert Vince Battista and I drifted along a rock-studded sand flat in southern Connecticut. The conditions were ideal: we had light wind, a gently-flooding tide, and the small bluefish and schoolie striper were busting on top. Better yet, the fleet was busy targeting blackfish, so we had the cove and fish to ourselves.

Eager for explosive action, Vince worked a big fly from atop the bow platform while I slung a new topwater lure, the Game On! X-Walk, across depths ranging from only 3 to 12 feet. Both offerings immediately rose fish, and after several short strikes we were both onto bass.

Game On! designed the X-Walk for topwater action. The lure’s signature “walk-the-dog” motion, combined with rattles, draw attention from fish a considerable distance away. The X-Walk is 6 inches long, well-balanced, and weighing in a 2 ounces is extremely castable. 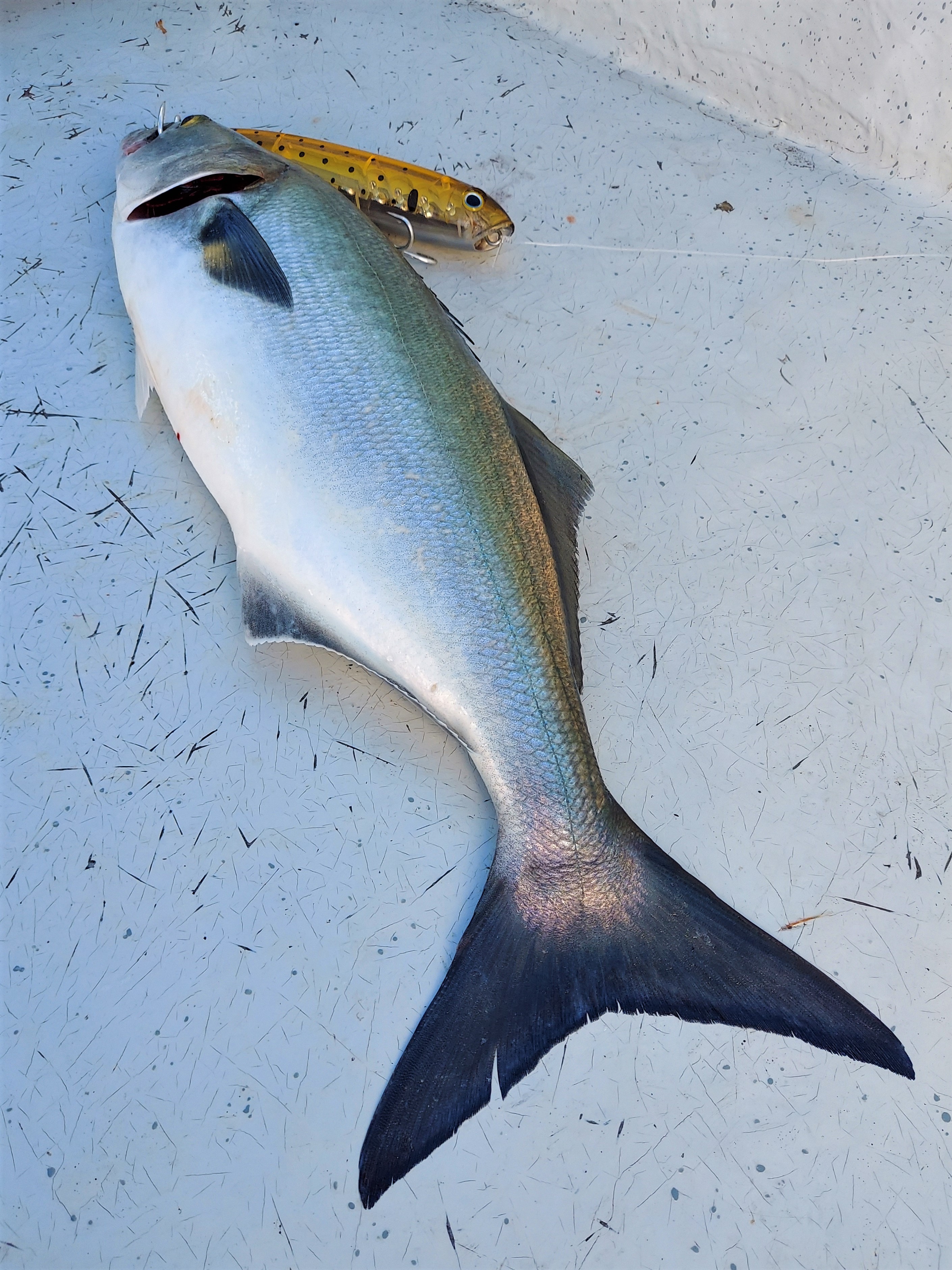 When retrieved properly, the design of this plug sparks action from bluefish and striped bass by simulating an injured and struggling baitfish, which even fussy or lazy bass can’t pass up. I imparted the signature walk-the-dog action by using sharp snaps of my rod tip. I varied the time between rod tugs to change the plug’s action, which further drives bass crazy. Quickly working the rod tip creates a tight, zigzagging action; however, pausing a second or two between rod pumps allows the X-Walk to make longer, wider, side-to-side glides.

I used a 7-foot, medium-fast-action rod, which provides casting accuracy to breaking fish yet also imparts a responsive action to the lure. Casting distance, normally better achieved with a medium-action rod, isn’t a concern with the X-Walk because of its ideal weight.

“When you get a hit on such a lure,” says topwater expert Tim Lasusa, “wait until you feel the weight of the fish load your rod. It’s so tempting to instinctively set the hook when you see a big fish inhale the X-Walk, but wait until you feel the rod tip pull down—that’s when you set. I also usually set back to the side and low, not straight up, because you want the lure to stay low. That way, if you miss the hit, the lure doesn’t fly back at someone in the boat. It also keeps the lure in the strike zone if the bass or blue tries again. Both species are extremely competitive, and usually if one fish goes for it, another tries to grab the lure if it’s dropped. Look for swirls and follows, change speeds occasionally, but always have the plug complete its full side-to-side sweeps.”

Capt. Ned Kittredge (retd.), a pro out of Westport, MA with 30 years of chartering experience, offers additional input on topwater terminal gear: “When targeting big bass and slammer bluefish,” he says, “use the best hooks on a lure you can afford to prevent them from straightening out. Fortunately, unlike some other lures on the market, the X-Walk Topwater is through-wired and comes factory rigged with super sharp, heavy-duty VMC hooks, so changeouts aren’t needed.”

Stripers are “headhunters,” they attack prey from the front, so they’re usually hooked with the front hook. During the fight, a rear treble hook often catches the gill cover or the back of the head, which allows a big fish to apply excessive pressure on the lure to leverage free.

That’s one of the advantages of the X-Walk Topwater—it’s rigged with a front treble hook and a single rear hook. Given that they have three hook points, trebles have a 67 percent greater chance of initially sticking a fish; with bass targeting the head area of prey, the front treble hook on the X-Walk is ideally situated to set itself in the corner of the fish’s mouth. But the reverse holds true for bluefish because they attack baitfish from the rear.

“Single tail hooks,” says Lasusa, “are much easier and safer to deal with for toothy bluefish. They’re better for the fish, better for the angler, and they keep the bigger fish on. You may get fewer initial hookups, but you’ll lose fewer bluefish and have an easier time releasing them. Part of the reason is the gap of a single is significantly bigger than the gap of a treble, and it fits better around the tough jaws of bluefish. Single hooks are much easier to remove and less likely to foul-hook the fish, which are good reasons to replace a rear treble with a single on any lure.”

The X-Walk is also a good action producer for flycasters. Thanks to its crippled baitfish motion and rattling noise, the lure drives stripers and bluefish into an aggressive, striking mode—even from a distance—that can’t be achieved with a fly. Anglers fishing in pairs, like Vince and I were that day, trigger lazy bass into feeding by having the spincaster work an X-Walk while the flycaster tosses a large baitfish pattern diagonally across the path of a pursuing “buddy fish.” You can even fish the X-Walk hookless if your primary goal is raising fish and drawing strikes for the flycaster.

“The X-Walk has great motion,” concludes Kittredge, “and it also offers amazing action when fished hookless. It's a true game changer for fly casters. It’s able to raise fish from the depths, tease them up, get them fired up, and then you cast a fly in front and watch them eat. A slow-crank-and-stop retrieve is great, but sometimes ‘as fast as you can turn the handle’ really gets them excited.”

When targeting predators with an X-Walk Topwater, select a quality 7- to 7½-foot, medium- to medium heavy, fast-action spinning rod matched to a 3000- to 4000-series reel. Load the reel with 20- to 30-pound smooth, braided line. Attach the main braid to 2 feet of 50-pound Fluorocarbon or mono leader with a Uni-to-Uni or similar knot. Use a Palomar knot to tie the leader to a 75-pound Game On! stainless steel clip, which speeds lure changeouts.

For flies, Vince Battista likes Flatwing’s Monomoy Eel (2/0) and Monomoy Special, Single-Feather Olive or Tan (2/0). His leader preference is 9 feet of 20-pound mono with an 8-inch bite tippet for the bluefish. His fly line recommendation is an intermediate-sink RIO Outbound Short or similar line, and he recommends using a 9-foot, 8- to 10-weight rod in southern New England waters.