Hickory Shad—and other species often loosely lumped together as “river herring”—are frequently landed as bycatch during spring and fall runs of schoolie striped bass. But for light tackle anglers on southern New England’s major tidal rivers, hickory shad offer great sport in between spotty striper bites especially at the shoulders of the season and even through late November.

Nicknamed “Yankee Tarpon,” these anadromous (species born in freshwater that spend most of their lives in saltwater but return to freshwater to spawn) fish are renowned for their somersaulting runs, speed, and considerable strength despite their size, which is typically 15 to 20 inches long.
Fishing regulations often vary by watershed, and hickory shad somewhat resemble protected or state-regulated anadromous fish. As such, anglers are cautioned to consult the most recent fishing regulations to avoid imperiled resources such as blueback herring, which have been commercially over-harvested and exploited for decades. Hickory shad somewhat resemble menhaden, but they differ significantly when compared side by side. https://www.eregulations.com/connecticut/fishing/saltwater-fish-identification

The hickory shad run begins in local waters in late March, and it continues through early May. This is the prime time to hit a river or estuary to do some hickory fishing. They’re a great early-season substitute for the depleted spring run of winter flounder. But there’s a second surge of hickories in late fall when they again show in rivers and gather on many nearshore reefs in Long Island Sound.

Where to target these fun fish varies, but lower sections of rivers such as the Housatonic, Quinnipiac, Branford, and Connecticut near Long Island Sound, and the Westport River in southern Massachusetts, are examples of prime spots. You do need to know where to fish, and local tackle shops can provide tips for shore- or boat-based locations. Start by looking for slow or sheltered water on the edges of fast water. This is where shad will stage to get out of the current as they rest to continue their run upriver.

“One example of sheltered water,” says Capt. Ned Kittredge, a retired charter captain with 40 years of experience along southern New England, “occurs in the lower Connecticut River. You can motor south from the train bridge to Gibraltar Rocks, which are three large, clearly defined boulder fields. This is a great spot to anchor, but keep an eye on your chartplotter and be cautious of subsurface rocks—they’ll destroy your propeller. Cast a small, bright lure—like the Game On ¾-ounce EXO Jig—up or across current and retrieve just fast enough to keep your lure from hanging bottom. Hickory shad and schoolie stripers await prey here in the slower and deeper water.

“There are times in the Westport River when the shad look like Asian jumping carp, especially in the fall—early morning is best if the tide is flooding. There are lots of them in the river for most of the year. But they prefer cooler water. The only time they become scarce is when the water temperatures skyrocket.

“My friends and I use them for striper bait; unlike a menhaden, they swim deep or ‘go down’ looking for a place to hide. I catch them three at a time with my cut-down sabiki rig that has 30-pound main-leader line, #4 hooks, and a 3/8-ounce Gamakatsu jig head with a yellow curly tail or a ¾-ounce gold EXO Jig—three hooks in total. They can't resist yellow. The fly guys like hickories because the large ones fight the same as a similarly sized striper. Sometimes catching bait is the most fun all day.”

In terms of rigging up with spin gear, you don’t need to make it complicated. Simply tying a small EXO Jig to the end of your line is a viable and easy option. But it’s best to run about 18 inches of 20- to 25-pound leader between the lure and your 12- to 17-pound mono or braid main line, especially in case you run into stripers or small bluefish. Another way to productively catch hickory shad is with a tandem-lure rig. Tie on a second ¾-ounce EXO Jig on a dropper loop about 9 inches above the bottom lure, which obviously doubles your chances of catching a fish or landing two at once, and you can also vary the color to see if one is preferred.

The timing of the fall hickory shad movement through Long Island Sound depends on the cooling of the water. Once they enter the Sound, one of the best places to find hickories is shallow reefs within about three miles of the coastline. The north side of Branford Reef, locally called “the Beacon,” is one such perennial hotspot.

To locate rips in your area, look over a local chart. Pinpoint structure where the depth rises and falls abruptly. Some reefs, of course, are marked by navigational aids, while you can find others with electronics. Productive reefs for hickory shad, as well as schoolie stripers, usually appear as narrow or oblong strips rising from a depth of 35 to 45 feet deep to a peak of 12 to 25 feet deep, although I’ve caught them in deeper water on the outer Black Point reef off Niantic.

Once you’ve found a reef, motor up-current while watching your depthfinder. When the reef flattens out, cut the motor and drift back toward the rip line. Drifting, rather than anchoring, allows the boat to keep pace with your tide-swept lure, and you can cover the reef much more effectively on successive drifts.

Hickories are aggressive and don’t shy from larger lures. Using a light conventional outfit, free-spool a 1.5-ounce gold, silver, or white EXO Jig until it bumps bottom, then immediately engage the reel. Retrieve the jig about 8-10 cranks at moderate speed, drop back down, hit again, and repeat. Continue drifting until you’ve cleared the hump or entered the rip line.

Pay close attention to when and where you find fish on each reef. Once found, use triangulation or electronics to return to the fish on successive drifts. Then shorten your drifts to focus on the productive “window” and avoid wasting time in empty water. If you don’t hook up after several differing drifts, it’s probably time to try another reef. 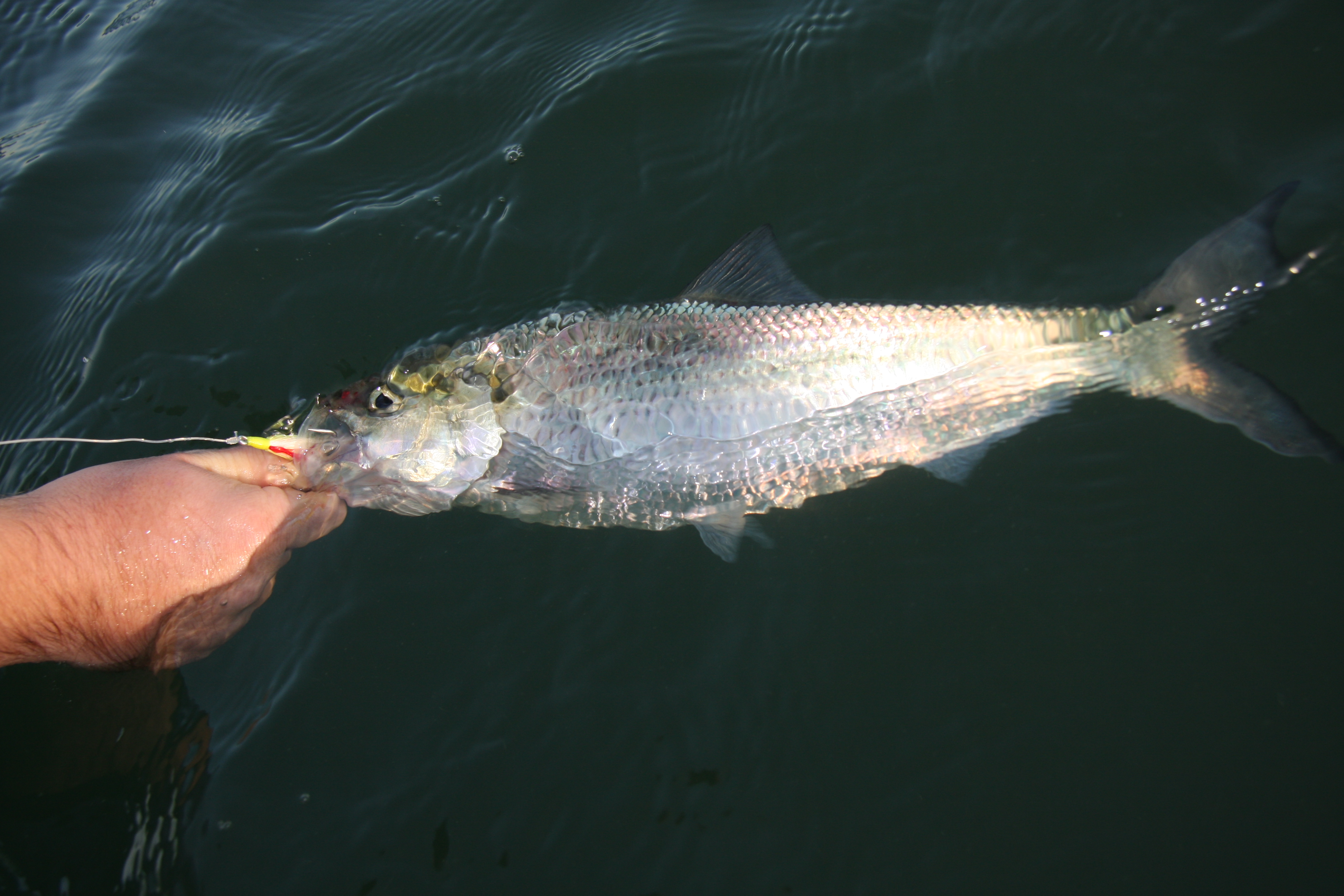 On the Fly
“To target hickory shad with a fly rod,” says flyfishing expert Vince Battista, “anglers will often under-gun on leader and tippet. Using a longer, sensitive rod allows anglers to cast flutter spoons, shad darts, or even Hot Spot-style jig nymphs with a delicate presentation.
“My preferred method for shad fishing is with my 6-foot 2.5-weight Brackish Flies fly rod (brackishflies.com/rods). Yep, 2.5-weight rod! Hickories would snap a tippet long before they break a rod tip, and the increased sensitivity of the lighter rod means higher hookup rate, a balanced cast for a monofilament running line, and fewer foul-hooked fish. A 5-weight rod is fine from a boat, but for fishing tidal creeks and estuaries (some of which are less than 20 feet across), I wouldn’t trade my 2.5 weight for anything heavier.

“Using an old Orvis Battenkill click reel, I spool 100 yards of backing, usually 20-pound gel-spun Dacron. Instead of a conventional fly line, I use monofilament running line—for both trout and shad—this is most often 100 yards of 6- to 10-pound Stren Hi-Viz gold monofilament. I top this off with an Albright knot connected to a 12-foot, 3x tapered Fluorocarbon leader, which I trim to match the diameter of the Stren.
“Many times, I believe these fish aren’t actively eating during migration, so the takes are more reaction-strikes than ‘food feeds.’ This means you should have a diversity of flies to get you dialed in.”

Battista likes to mix one gaudy baitfish fly with a conventional nymph. For the point fly (bottom-most fly), he uses a large dumbbell-eyed jig fly in chartreuse and white (size 6). For the tag fly, he uses a Partridge and Pheasant soft hackle with an orange hotspot (size 12). Often, the fish will move towards the heavier jig fly, and take the Partridge and Pheasant as a consolation prize, which is not dissimilar to casting an EXO Jig as the anchor lure of a sabiki rig. The hit feels like a subtle bump, so set the hook on everything you suspect is a fish.
“Once hooked,” Battista says, “these fish go for lightning-fast runs. Using a click reel provides great sport since the only ‘drag’ is from your palm. With a light tippet, smaller rod, and tiny click-reel, even hickory shad fishing feels like angling played on ‘expert’ mode.”