Big fish need lots of protein, and they get it from eating smaller fish. Forage fish or “baitfish” are loosely defined as small, schooling fishes that form critical links between the marine zooplankton community and larger predatory fish. Forage fish species occupy every marine/estuarine nearshore habitat on every coast. If you understand them—and can then reasonably replicate them with a lure—you’ll have a better chance of success this season. Here’s a look at what’s swimming along our various coasts.

Starting in southern waters, scaled sardines (Harengula jaguana), (aka whitebait or pilchard), and thread herring (Opisthonema oglinum), (aka threadfin, greenback, or greenie), rank at the top of Southeast forage species. Threadfin have a bright green/blue back and spots along the dorsal side. Most notable is a long, thread-like trailer extending rearward from the first dorsal fin. Threadfin have a rotund body, a deeply curved belly, and a small, pointed head. They range as far north as Massachusetts but are most common from North Carolina to Florida along the Atlantic coast, and through the Gulf of Mexico and Caribbean.

Almost its twin—and frequently confused—the scaled sardine lacks the dorsal-fin trailer, has a larger eye, an olive-green back, and scattered spots. Scaled sardines are distributed in the western Atlantic south of New Jersey through the Caribbean. A third common and similar baitfish—Spanish sardine (Sardinella aurita)—occasionally mixes with those two species. They’re identifiable by a slender body, lack of spots, blue back, and silvery or brassy flanks. All three of these baitfish are primary targets of snook and redfish.

If you spot or net bait—or a landed fish disgorges a few—match your lure size to the prey species that day, as these baitfish can range from 1 to 4 inches long. The Game On! EXO Jig in “Green Mackerel,” “Electric Blue,” and “Silver” patterns are perfect choices. Part of the secret is the eyes of the lure, which need to stand out like a sardine’s because predators key on them. 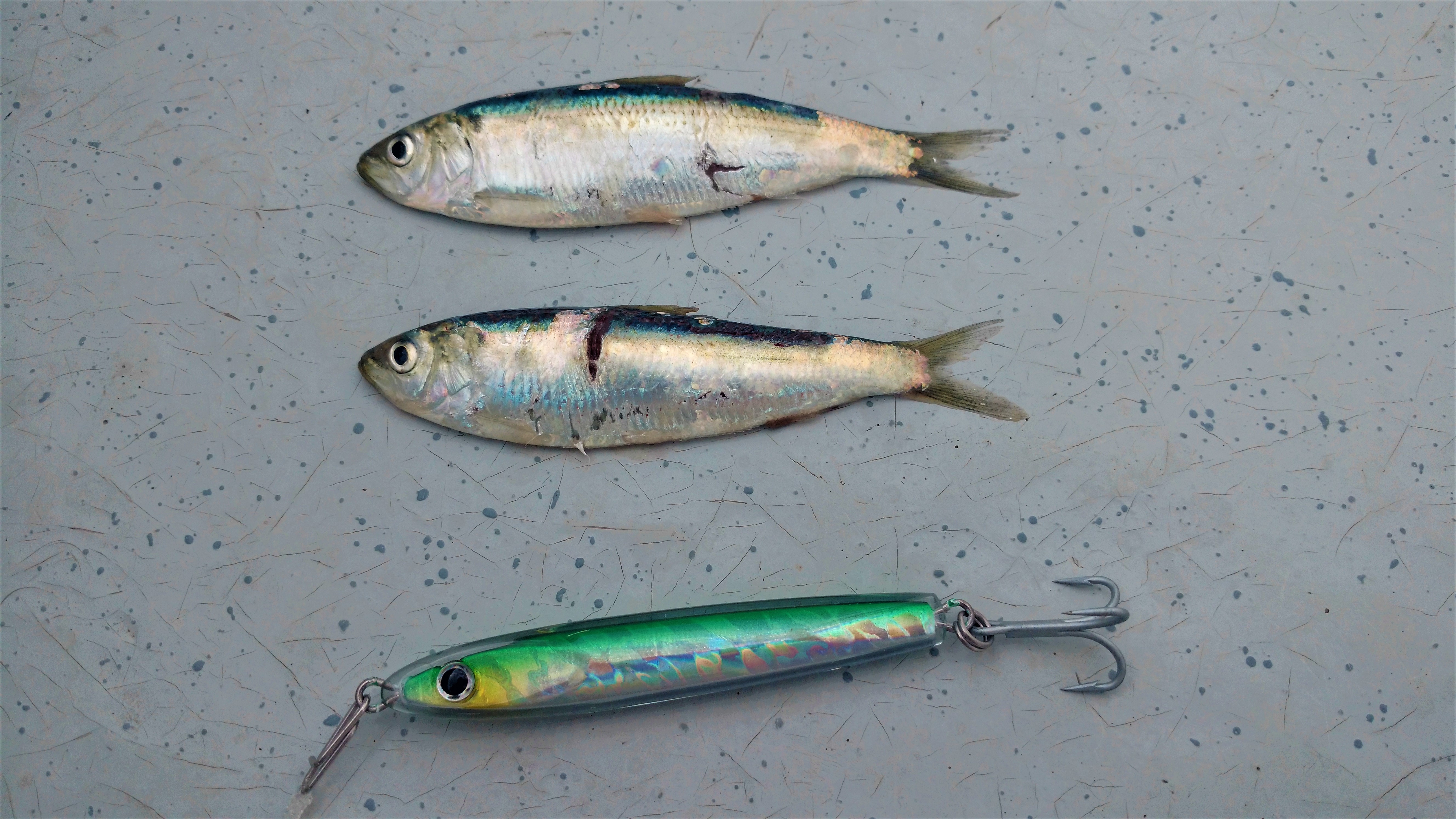 The Northeast and Mid-Atlantic version of whitebait is the peanut bunker. Ranging from Nova Scotia to Jupiter Inlet in Florida, Atlantic menhaden (Brevoortia tyrannus), “bunker,” or “pogy” are the premier forage species for many inshore gamefish, and “peanuts” are the juveniles. Bluefish, striped bass, weakfish, and false albacore assault them in the Gulf of Maine, Buzzards Bay, Block Island Sound, Long Island Sound, and throughout the entire Mid-Atlantic region.

Bunker are in the herring family Clupeidae, and swim in large schools that stratify by age and size along the coast. While adults grow to 15 inches long, peanuts range from 1 to 4 inches. Bunker are silvery overall, but dark on top, and are more flattened than herring. Black spots behind the gill plates distinguish them from other local bait species.

“We developed the EXO Jig,” says Dan Orefice, owner and CEO of Game On! LLC, “because we wanted a lure that not only resembled baitfish here in the Northeast like bay anchovies, peanut bunker, and silversides, but we wanted to make something extremely durable that could take a beating and last more than one fishing trip. Whether the lure was being slammed around in the boat or ripped through a boulder field, we wanted our lure to be considered ‘bulletproof.’

“After testing many different composites, we settled on a proprietary material that was very clear and extremely durable. Having a bulletproof lure was one thing, we also wanted to make sure it had the right action, especially when targeting albies, bonito, and bass.

“The size-to-weight ratio of the EXO Jig allows the lure to skip and bounce across the surface with a fast retrieve, but it will keep a tight wiggle at slower speeds. Whether you’re trying to ‘match the hatch’ or stick out and be a little different, we have a variety of colors and sizes available.”

In the chilly Gulf of Maine, Atlantic herring and Atlantic mackerel are common targets of big bluefish and large striped bass. “Tinkers” are young Atlantic mackerel (Scomber scombrus) ranging from 6 to 10 inches long. They have an elongated and rounded body and a long, pointed nose; they are steel-blue, and marked with distinctive wavy black lines on their back with silvery-white underside. The 4-inch EXO Jig in “Electric blue” should perform well when the bass are prowling the ledges and beaches of northern New England.

Bay anchovies (Anchoa mitchilli), also known as “rainbait,” are a small, translucent fish, 1 to 4 inches long, that live in schools in the western Atlantic from Maine to Florida and westward along the Gulf of Mexico south to the Yucatán. Bay anchovies are slender with a silvery-green back, clear body, and silver stripe along the sides. They have a large, underhanging mouth, single dorsal fin, and forked tail. Bay anchovies are an important food source for predators like bluefish, weakfish, seatrout, and striped bass. The smaller EXO Jigs in “Green Mackerel” is a good fit here.

The EXO Jig also resembles other small, silvery baitfish that are present in the Northeast, like silversides (aka spearing) and sand eels (aka sand lance), which belong to the Ammodytidae family. They feature a slender body, pointed snout, and a silvery body with an olive back. All three baitfish are popular for albies and bonito—and the EXO Jig is a go-to lure when the tunoid bite is on, which includes chub mackerel and Spanish mackerel.

Swinging across to the Pacific Northwest, forage fish are critical prey for salmon, not to mention rampaging schools of black rockfish (Sebastes melanops). Pacific herring (Clupea pallasi) is a silvery baitfish with soft fins and a deeply forked tail. Surf smelt (Hypomesus pretiosus) are elongated with a rounded adipose fin, a short lateral line, and a small mouth. Their belly and sides are light, and they have an olive-green back with a characteristic silver band near the lateral line.

Pacific sand lance (Ammodytes hexapterus) are common in the Pacific Northwest. Colloquially they are sometime called candlefish, but that name is normally associated with the eulachon (Thaleichthys pacificus) a smelt species. “Candlefish” derives from the fish containing so much fat during its spawning time that they can be dried, strung on a wick, and used like a candle. Native Americans processed them for their oil.

Pacific sand lance and juvenile Pacific herring are both important forage species for resident salmon; in Puget Sound, sand lance comprise some 35 percent of the diet of young salmonids and even a higher percentage for chinook salmon alone. Once again, the EXO Jig in “Green Mackerel,” “Electric Blue,” and “Silver” colors are a very close fit in the Pacific Northwest.

Heading south, the Pacific sardine (Sardinops sagax) is common to Southern California waters. Another prevalent species is the anchovy (Engraulis mordax). Any predator will eat an anchovy, which typically range from 3 to 5 inches. Interestingly, when anchovy population numbers are up, Pacific sardine numbers are down and vice versa.

Reef-dwelling ambush feeders like the calico bass are king in SoCal waters. Calicos eat small baitfish and hunt by waiting for prey to swim past. Sand bass, ocean whitefish, and California sheepshead mix with calicos. These reef-dwelling ambush feeders love a deep-running lure, which can also be vertically jigged in the right conditions, and therefore the EXO Jigs also excel here.