Today, anglers everywhere routinely target inshore predators like striped bass, bluefish, snook, redfish, false albacore, jacks, bonito, and many others on light tackle once thought only suitable for smaller, less-powerful species. These rods, in conjunction with ever-evolving spinning reels, must handle dynamic fish while being able to sling light soft plastics, jigs, and plugs using super-thin, powerful, and unforgiving braid. So, what’s the best all-purpose casting rod and why?

“A medium-fast action rod is ideal for casting a wide range of lure weights,” says Randy Chin, CEO of Temple Reef rods (templereef-usa.com). “But a medium or moderate action is important when fighting tuna species because a large percentage of the battle is vertical. A moderate-action rod places more pressure on the fish and less pressure on the angler due to its parabolic curve, and the load distribution prevents tips from snapping, especially when novice anglers ‘high stick’ their rod during the battle.”

“For spin tackle,” says Captain Ned Kittredge (ret.), a pro with 40 years’ experience on the saltwater, “you need to use a light outfit to cast light lures, and the rod and reel need to be well balanced. Match the reel to a 7- to 7 ½-foot, medium-fast action graphite rod. For most nearshore species, fill your reel with up to 20-pound superbraid. Braided line plays a significant role in casting light lures as its lack of ‘memory’ facilitates longer casts.”

A rod’s power refers to how much weight or load the rod is designed to handle. Ratings include ultra-light, light, medium, medium heavy, heavy, and extra heavy. The rating will be accompanied by manufacturer-recommended line test and lure weight ranges.

Action is determined by how far down the blank the bend of the rod extends. Rods with fast to extra-fast action are best suited for pinpoint casting accuracy and solid hook-sets even with larger lures. A medium or moderate to slow action is prime for extending casting distance with specific applications such as pitching live baits, and finesse working smaller lures, jigs, and baits. Rods are categorized in three basic actions; fast, medium/moderate, and slow.

A fast action rod is relatively stiff but has a light/flexible tip, where only the top 1/3 of the rod bends when casting or under light strain. A fast action allows a rod to load quicker, and makes it easier to produce high lure speeds, which translates into the ability to cut the wind better and match well with EXO Jigs. An angler can make casts faster when casting off the tip, which is particularly advantageous when working quick-breaking/quick-vanishing predators like Spanish mackerel, false albacore, and bonito. But there’s a trade-off because the angler doesn’t feel the rod loading and unloading well, which also makes the precise release timing difficult for beginners.

Fast action rods are good for immediate hook sets because the rod gets past the soft tip to the “backbone” and loads quickly to the stiff portion of the rod. They allow for more accurate, pinpoint casting, which is again important to target a specific fish or small school of fast-moving fish. They’re helpful for casting lighter lures on relatively heavy gear because you can cast a light lure by mainly using the tip portion. However, these rods do not overload (using lures slightly too heavy for the blank) well. 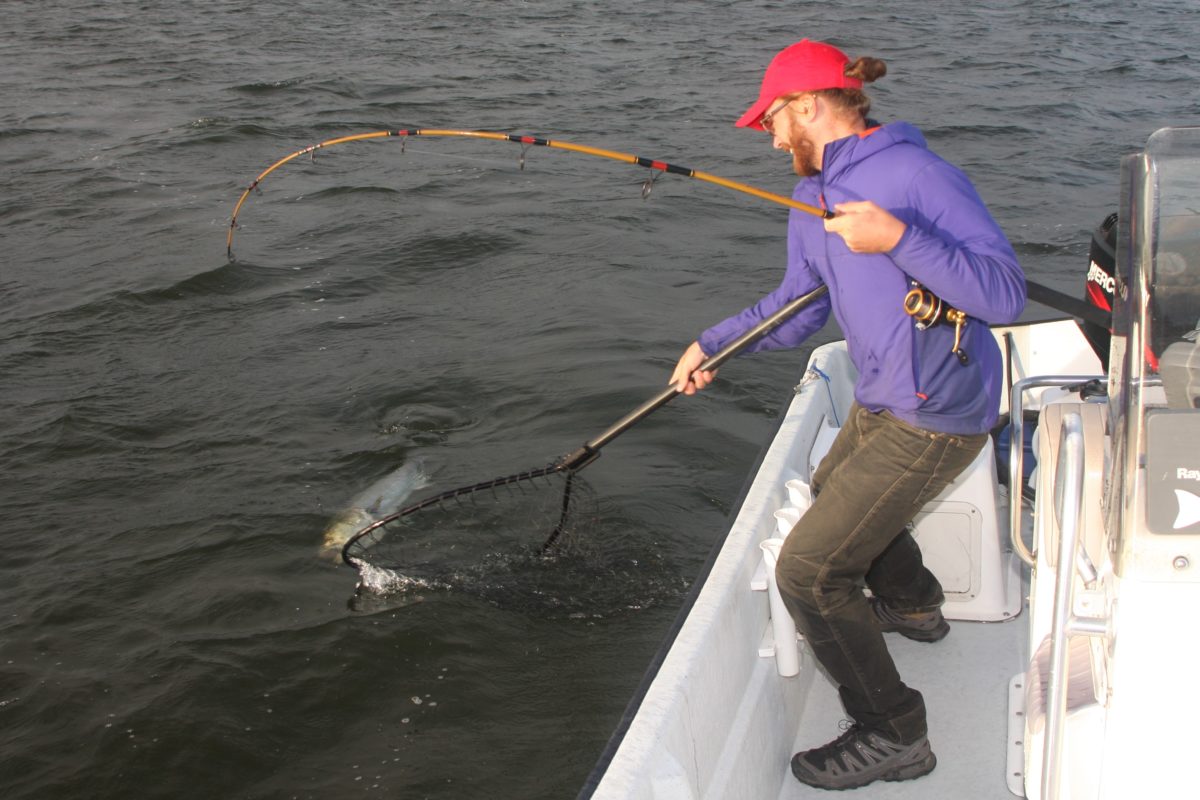 Fast action rods aren’t ideal for vertical jigging, such as slow pitch jigging for black sea bass, specifically because you need the rod to load more to help impart flutter action to the lure. For example, if you’re using the 4-inch Exo Jig to work up off the bottom for bluefish or schoolie striped bass, you might opt for a moderate action rod. Also, the quick and sudden recovery rate of a fast-action blank can snap a light leader or tear the hook from the soft mouth of fish like fluke and weakfish. Fast action rods are ideal as part of a light or ultralight setup, and work well for casting lighter Exo Jigs, the Bent Minnow and the 7-inch Big Occhi.

A moderate-action rod offers a more parabolic bend (distributed curve) when loaded, so it bends through the top half of the rod rather than the top third, and it’s easier to cast. Many anglers, especially novices, can cast more accurately with a medium-action rod because there’s more time (during the cast stroke) to line up and “aim,” as well as time to predict your ideal line-release point. They can be great for casting larger soft plastics like the 10-inch Big Occhi, plugs like the MagCast 5.5, and the heaviest Exo Jig, where more of the rod is supporting the lure in the cast.

Medium/moderate-action rods are more enjoyable to fight big fish because the rod bends farther down towards the angler’s hands, providing more “feel” when it comes to deciding how much pressure to apply at different points in the fight. Rods with this action also do a good job of switching over from casting to vertical jigging, and they’re therefore multipurpose. This rod action is the most versatile in terms of a lure casting set-up for the recreational or weekend angler. 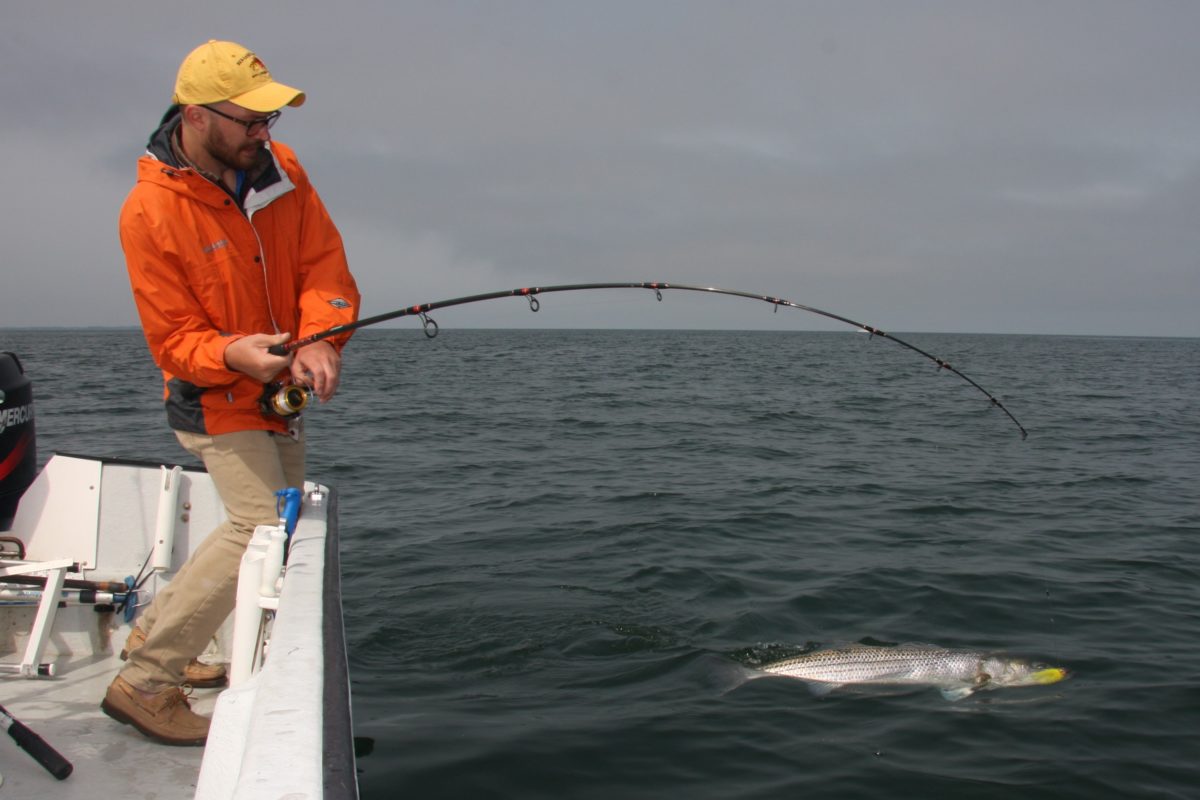 Slow-action rods occupy the smallest part of the market, but it’s an important part. Slow rods require smooth acceleration and greater tip control during the casting stroke. If you’re “overloading” (bending deeply) the rod, you can “lob cast” (such as when heaving a live, adult bunker) and use much more of the blank, which you can best visualize as a catapult-like action. Medium-slow to slow action rods are popular with surfcasters using extra-long blanks to make extremely long casts into the surf, where distance, not pinpoint accuracy, is the goal.

Slow-pitch jigging rods are relatively new on the market, and they feel almost comically thin when you first pick up one. The secret to their strength is their parabolic bend. They flex evenly from grip to tip, distributing the weight for extra durability, which allows the rod to load to impart a unique action to a deep, flutter-style jig.