Rigging and Tuning the EXO Jig

Before you toss any new lure into the brine you must rig it first. But there are many ways to rig a lure, depending on personal preference, fishing style, target species, and how the lure itself comes from the manufacturer. The term “rigging” can be subdivided into “tuning,” so it’s possible to both rig and tune a lure. Fortunately, the Game On! EXO Jig needs no hook tuning.

Many lure makers attach cheap hooks and second-rate hardware to their lures to reduce cost. But inexpensive hooks and weak split rings translate to lost fish when the thin-gauge wire straightens or snaps during a battle. The EXO Jig’s VMC 4X-Strong Fishfighter treble hook is top-of-the-line for strength and dependability. This hook is of a forged, thick, high-carbon metal featuring an O’Shaughnessy bend, which is impossible for a fish to open during a fight, when being lifted over the gunnel by the lure, or when dragged onto the beach. It’s also razor sharp. The 4X treble is attached to the EXO Jig with a substantial split ring, completing the package at the business end of the lure. No need to change out this hook before chasing big bonito, false albacore or other bruising predators like bluefish.

Rigging the EXO Jig to your line depends on several variables, and there’s no single right way to do it. Most casting anglers prefer to use braided main line rather than mono. Braid has no memory, is thinner and lighter than mono for greater casting distance, and is highly sensitive with zero stretch for bite detection and solid hook sets. 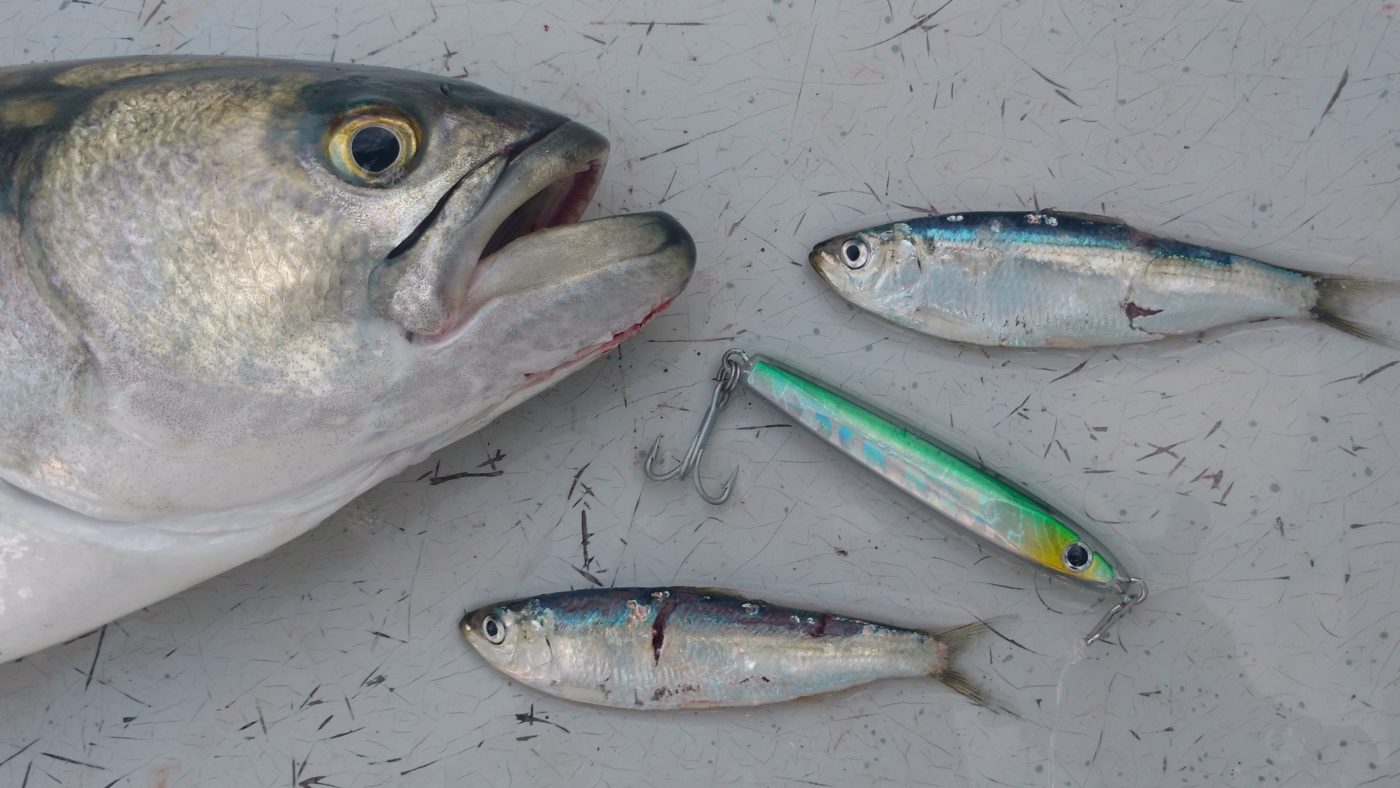 Many fishermen use a 12- to 18-inch section of mono or Fluorocarbon leader between the braid and a casting jig. There are several reasons for that, but predominantly mono and Fluoro are clear and nearly invisible whereas braid is solid color. The super-bright hi-vis braids are particularly useful for visually tracking your line, but that’s even more reason to add a length of clear leader between it and the lure. If you can easily see the line, so can the fish. Mono/Fluoro is also easier and safer for bare hands when leadering a fish.

Mono and Fluoro are stiffer than braid and hold a knot-to-lure connection much better than slick braided line. But you have to attach the braid to the leader somehow, and that’s best accomplished with a double-uni knot, which is animated here: youtube.com/watch?v=Xk_VUb-dOQo&app=desktop or actual here: youtube.com/watch?v=6VgQLBpwJUY. The double-uni is a strong connection, which when tied properly will not slip, and if you prefer a leader longer than 18 inches, this knot is castable through rod guides. A drop of superglue on a line-to-leader knot will further smooth it for through-guide casting and perhaps add another percentage of strength.

The next step is to attach your leader to the EXO Jig. The fastest and easiest way to do this is by using a Game On! Clip-On stainless-steel clip. This paperclip-style fastener has an advantage over a regular snap-swivel because it won’t open as easily if a predator like a bluefish clamps down on it; therefore, you have less chance of losing your lure and your fish. Its entry tip is also more protected, so there’s less protrusion for it to snag on something or scratch you. Use a standard clinch knot to attach your leader to the clip, moisten, and snug it down tightly. Now it’s simple to change out your EXO Jigs or other Game On! lures by sliding them on and off the clip.

Another variation for tuning an EXO Jig is to use a swivel to help prevent line twist during turbulent fishing conditions, such as when casting into a roiled rip or busting surf. Although some anglers prefer to just tie a snap-swivel to the terminal end of the line and then attach the snap directly to the jig, again, that’s a weaker connection given the chance of the snap opening when bitten. A solution is to permanently attach a barrel swivel to the jig.

If your fishing style is one that foregoes a mono or Fluoro leader, and you just tie your braided main line directly to the Clip-On clip, the fastest and strongest braid-to-clip or braid-to-swivel connection is the Palomar knot, learned here: youtube.com/watch?v=TFk_Ktw2f1w.

Of course, there are many anglers who feel “cleaner” is better, and prefer no hardware attached to their lures. In that case, the EXO Jig is ready to go right out of the box. But to get the most out of the jig’s action ability, a clinch or similar snug knot hampers the swimming movement, especially if the leader is of a high pound-test. To solve that problem, use a non-slip loop knot for your direct leader-to-lure connection. A quick search will provide you with several different non-slip loop knots options, including this video youtube.com/watch?v=-pgGztoe9Kk&feature=emb_rel_end 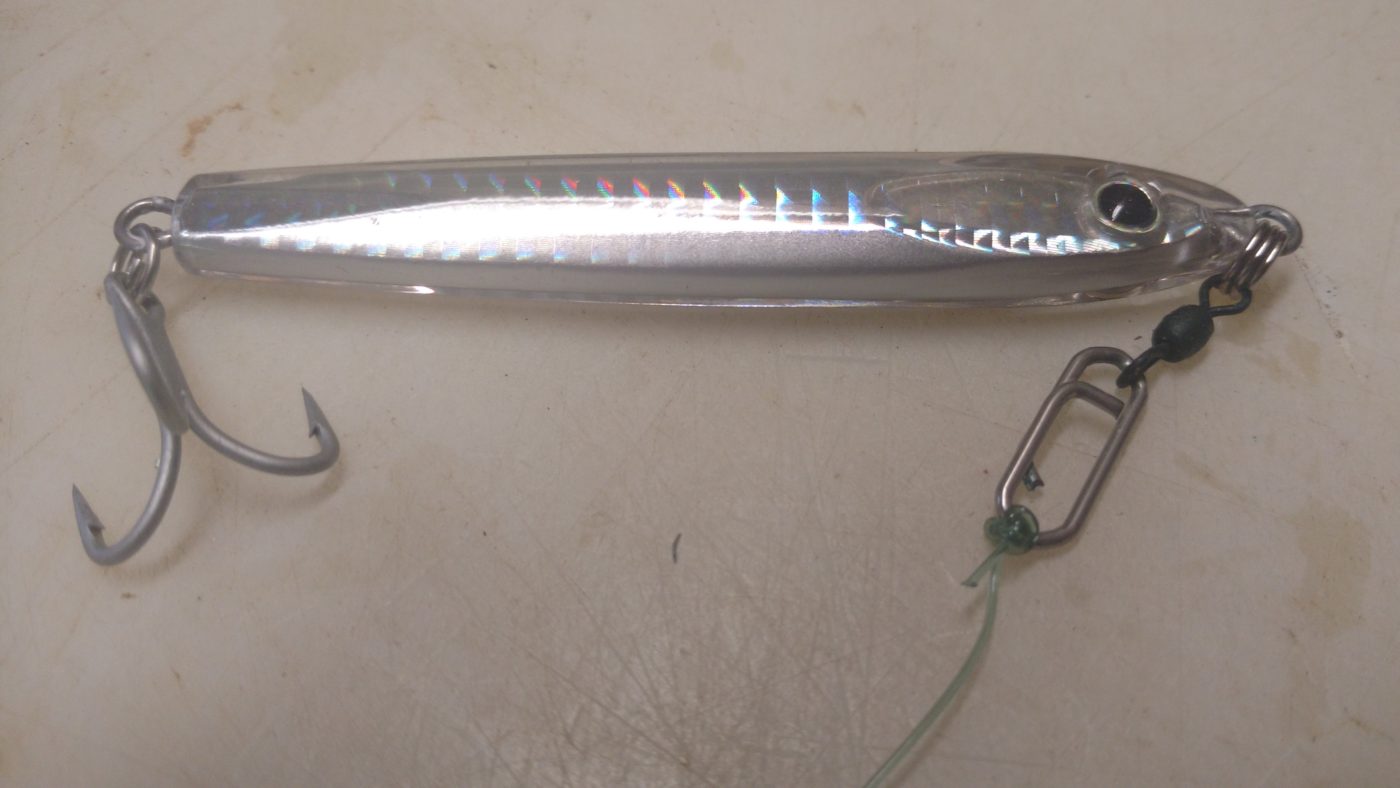 If you’re constantly looking to try new approaches to rigging, there’s another option for line or leader material other than mono or Fluoro, and that’s Perlon. Its properties offer an advantage for a rigorous day of fishing.

When a big fish (or a bottom snag) stretches Perlon it comes back to its original diameter within 3% — even after 400 to 600 stretches. Why is that important? Once pulled hard, mono remains stretched out, so it then has a thinner diameter and up to 25% reduced tensile strength. For example, if you were using 50-pound mono, once shocked and stretched, it may only rate at 35- or 40-pound test, and it now has a lower abrasion resistance because it has also become thinner. In contrast, like a rubber band when stretched, Perlon comes back to its original diameter so it will maintain its tensile strength and toughness longer than conventional mono.