November is a transition month for anglers. Launches are largely deserted, and marina boats are dry-docked and wrapped in plastic like loaves of bread on supermarket shelves. Except for those anglers hunting blackfish, most guys have put away their tackle and turned to football and leaf raking. But with our recent hot summers, warmer water temperatures, and bountiful bait, several species including small bluefish stage in southern New England well into November.

Bluefish fatten themselves on late-season prey like baby bunker before heading out of Long Island Sound for the winter. Clusters of them chase bait to the surface or forage for it along reefs where blues are eager to grab a well-presented hook.

Surface pluggers and fly fishers have lots of fun with late-season bluefish. But the seemingly incessant north winds and cold can make for difficult casting conditions. And the fish don’t always show on top, especially later in the month. Then, unfortunately, some light-tackle guys have less luck. Success lies in versatile heavy casting and jigging lures like small diamond jigs and the Game On! EXO Jigs, which allow you to cast great distances from the beach or boat and reach more fish than other anglers using a variety of other methods.

EXO Jigs are easy to fish in rough seas and cold weather. When drawn up from under a school of bait they closely resemble hapless, fleeing forage. Strikes come swiftly and forcefully when the lure is either dropping or being retrieved. The shape of the EXO Jig lets it “flutter” seductively as it falls in a stiff current yet wobble enticingly like an escaping baitfish when retrieved. The bare, swinging hook imitates a baitfish’s beating tail and adds to the lure’s attractiveness. 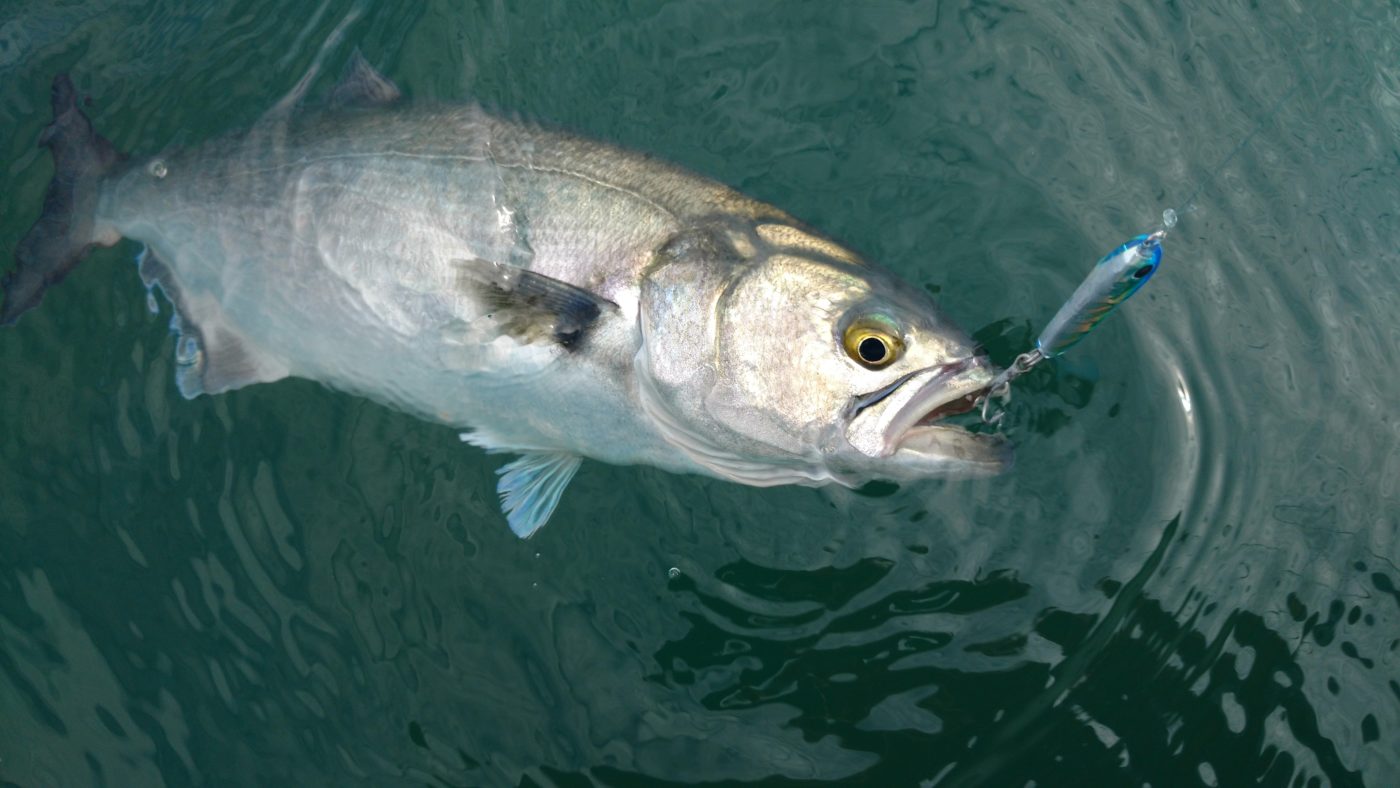 On many November days, especially once the sun has climbed high overhead, roaming schools of breaking fish are often the exception rather than the rule. That’s when it’s time to target the reefs where pods fish gather to feed all day. The north shore of Long Island Sound has countless shallow ledges and rock piles to ply along the Connecticut coast, and many of them attract blues.

Bluefish sometimes hold and feed behind structure, but most often they’re stacked like firewood in the “sweet spot.” The sweet spot of a rip is located on the up-current side of a reef where the ledge slopes up from a flat bottom. Here, the upwelling current creates a vacuum or “lift” as it compresses and accelerates to travel over the structure. Think of these conditions like air rushing over an airplane wing to create lift. Small blues prowl in this quieter water where their energy expenditure is less, and they wait for tide-tumbled prey to be swept past.

Once you’ve located a reef — easy to spot on a chart or read on the surface as a rip line — run a short distance up-current while watching your depth finder. When the reef levels to a flat bottom, shift the motor into neutral, dump your jig overboard and drift back toward the rip.

Although there are several ways to fish jigs, “squidding” is the most effective technique for bluefish staging along a reef or feeding under a school of baitfish. Start by quickly free-spooling your lure until it bumps bottom in areas of 15 to 50 feet deep during a moving tide. Blues often hit the lure on the way down, so the drop is as important as the retrieve. A common mistake is to release the jig too slowly, which keeps it descending upright (vertical) instead of fluttering horizontally like an injured baitfish. Bluefish are challenging to hook as the lure falls, so be prepared to strike fast.

Once the lure hits bottom, immediately engage the reel and start your retrieve — a curious fish loses interest if the jig sits for more than a couple of seconds. Take about 8 to 10 quick turns up. Repeat the process until you’ve cleared the hump and worked down the backside of the reef or drifted out of the baitfish school. When conditions are right, the strikes will come hard and fast.

“The fish hook themselves,” says Captain Kerry Douton, owner of J&B Tackle (jbtackle.com) and the charter boat Dot-E-Dee out of Niantic, Connecticut. “Just lift the rod tip to make sure the hook is set properly, but never ‘high stick’ your rod. You could snap it on a big fish or if you’re hung on the bottom. After the hook-set, the most important thing is to keep steady pressure on the fish because if you let up on it they can use the weight of a jig to shake the hook loose — they use it as leverage. And be careful when you get the fish to the surface because, unlike bass, bluefish jump. If you have too much pressure on it, and bluefish shakes free, man, the jig’s coming into the cockpit. Especially with bigger bluefish, we suggest taking a hand wrap on the leader to take the pressure off the loaded rod.”

For added safety, especially if you’re out alone, you can always use a net to land bluefish. But be careful not to let the blue press face-forward against the net for long because they can cut the webbing with their razor teeth. 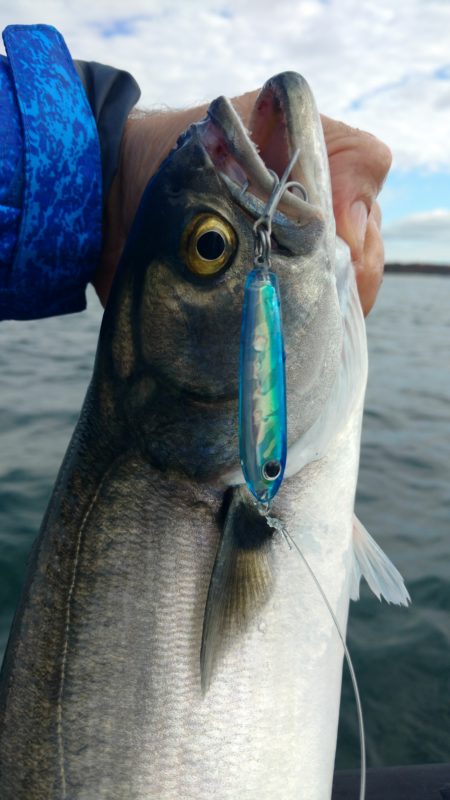 The small size of the EXO Jig closely matches local late-season baitfish, including herring, juvenile menhaden, and squid. The 1.5-ounce, 4-inch EXO is the perfect all-around choice in Long Island Sound because it’s small enough to resemble the forage yet heavy enough to reach bottom on shallow reefs when speed jigging with light tackle.

For bite leader I tie on 18 inches of 30- to 60-pound mono, depending on the size of the bluefish and the lure. I attach the jig to the leader with a loop knot to allow the lure more swimming action. Wire leader isn’t needed because bluefish rarely inhale a jig deep enough to reach the leader.

If you’re keeping some small bluefish for the skillet, be aware that they’re much fattier at this time of year as they prepare for migration. Bleed or gut and ice them immediately, and then once filleted, skin them and trim off as much subcutaneous fat and dark meat as possible. You’ll end up with a much milder product on the plate. Enjoy.