Western LI Sound action is red hot right now with big bass chasing bunker schools and small to large bass feeding near shore on sandeels, a lot of options on the table right now to hook into quality striped bass and some better numbers of bluefish as well.

We’ve been getting into stripers in a size range of 20-35lb. range the past few weeks and the fishing continues to improve in the western LI Sound anywhere from New Haven to Greenwich. Locating bunker schools with fish on them is the primary game and fairly calm seas are required to spot them, fortunately the stars have aligned the past few weeks other than some blinding morning fog. My go-to method when fishing artificial lures near bunker schools is either smashing a popper across the surface or casting a 10” Big Occhi and retrieving with a “walk-the-dog” style, the Big Occhi has been out-producing the poppers 3-1 but the key to success with this soft plastic lure is to keep it on the surface dancing in a side-to-side motion which requires a tip-up high sticking retrieve. The Big Occhi, when fished properly, provides a more subtle approach to fishing large bass and blues chasing bunker as it is a very convincing imitation of a wounded bunker straying away from the protection of the school of bait. My choice of color for the Occhi is white since it is the most visible on the surface for the angler and the fish when presented on the surface with a 7/0 screw-in swimbait hook. When fishing this method I am using a 15-30lb. class fast-action spinning rod and 30lb. braided line….the smoother the better! 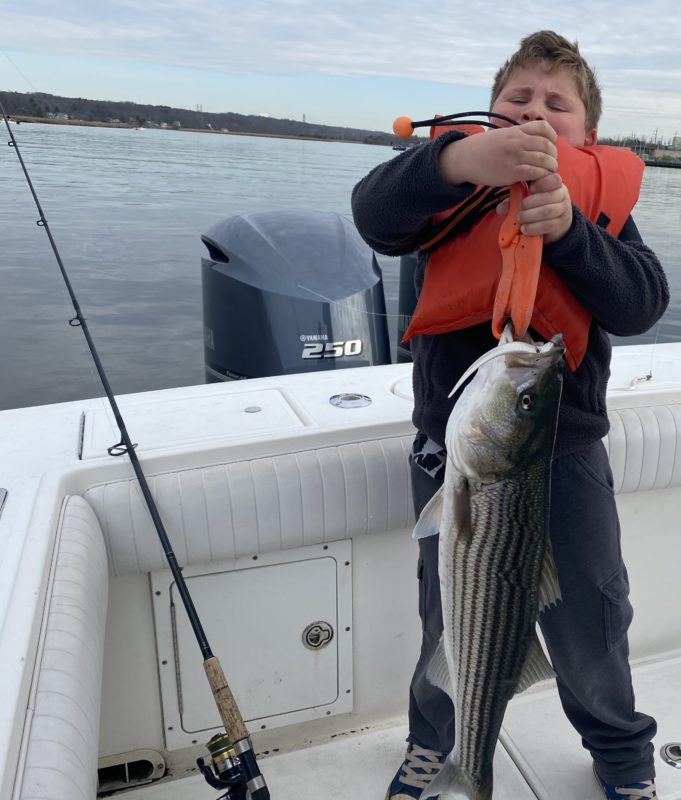 Keep an eye to the shallows as we kick of the month of July now as water temps have finally caught up to normal and July will fish better than June due to the late start we had this spring. We’ve been picking up fish near harbors mouths, estuaries, off the beaches and blind casting rock piles as well but when blind casting I prefer to use a weighted swimbait hook once the sun is up, but don’t think the fishing is over when the sun hits the water as I have caught several stripers in the western sound in the 50lb. range near mid-day on a bright sky….the fish rarely stop feeding so we just need to change our tactics to match the conditions!

My trips the past month have been designed to target big bass and blues following bait schools in deep water, but then I switch gears after the first few hours of daylight and head toward inshore structure as long as I have a moving tide and preferable higher water. I then downsize and fish the 7” Big Occhi using a 1/2 oz. jig head and I look for signs of sandeel activity, typically several cormorants patrolling a small piece of water is a solid sign but gulls and terns are also a dead giveaway as to the location of the bait and fish. The fish will break the surface at times especially when they are chasing the tiny baits in less than 10 feet of water. We’ve been picking away at quality stripers and smallish bluefish targeting sandy beach areas near structure or grassy shorelines. I prefer a tip-down pulsing retrieve for the weight 7” Big Occhi but not too fast and I tend to slow the retrieve as the lure approaches the boat when casting in tight to the shore. If you see fish on the surface regularly then switch to a weightless 5/0 swimbait hook and dance it on the surface in the same manner you would with the 10” version, nothing better than the explosive surface strikes we have been getting in shallow water lately although the bluefish do some damage to my Big Occhi supply! Most of the bass I am catching near shore are in the 20”-30” range which is a blast on a 10-20lb. class fast-action spinning rod like the Lamiglas Tri-Flex. 20lb. class braided line will do the job for casting the weighted or weightless 7” Big Occhi and you will be able to handle almost any striper patrolling near shore water without a problem.

June has been excellent fishing but I expect July to be even better as more fish filter into our water!